See you in court, Shell!

Friends of the Earth has today delivered a court summons to Shell at its headquarters in the Hague, to legally compel the company to cease its destruction of the climate, in a historic climate litigation on behalf of more than 30,000 people from 70 countries.

The 236-page complaint was delivered to Shell’s international headquarters this afternoon by Milieudefensie/Friends of the Earth Netherlands together with ActionAid NL, Both ENDS, Fossielvrij NL, Greenpeace NL, Young Friends of the Earth NL, Waddenvereniging and a group of 500 co-plaintiffs.

Donald Pols, Director of Friends of the Earth Netherlands said:

“Shell’s directors still do not want to say goodbye to oil and gas. They would pull the world into the abyss. The judge can prevent this from happening.” 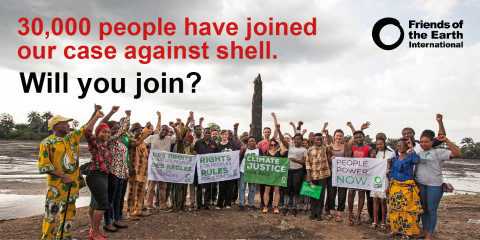 In the court summons, Friends of the Earth Netherlands outlines why it is bringing this groundbreaking climate litigation case against Shell - highlighting the company’s early knowledge of climate change and its own role in causing it.

Despite acknowledging that the fossil fuel industry has a responsibility to act on climate change, and claiming to “strongly support” the Paris Agreement, Shell continues to lobby against climate policies and to invest billions in further oil and gas extraction. This is incompatible with global climate goals.

The 2018 Intergovernmental Panel on Climate Change report, a key piece of evidence in this case, underlines the importance of limiting global warming to 1.5 degrees for the protection of ecosystems and human lives, and outlines the devastating and potentially irreversible impacts of any “extra bit of warming”.

The court summons proves that Shell's current climate ambitions do not guarantee any emissions reductions, but would in fact contribute to a huge overshoot of 1.5 degrees of global warming.

The plaintiffs argue that Shell is violating its duty of care and threatening human rights by knowingly undermining the world’s chances to stay below 1.5C.

In addition, the plaintiffs argue that Shell is violating Articles 2 and 8 of the European Convention on Human Rights: the right to life and the right to family life. In a historic Urgenda case against the Dutch state, the Dutch Appeals court created a precedent by ruling that a failure to achieve climate goals leads to human rights violations. The court ordered the Dutch state to cut its greenhouse gas emissions by at least 25% by the end of 2020.

Legal obligation for Shell to change its business operations

Roger Cox, lawyer - who initially represented Urgenda and is now leading Friends of the Earth’s case against Shell - said:

“If successful, the uniqueness of the case would be that Shell, as one of the largest multinational corporations in the world, would be legally obligated to change its business operations. We also expect that this would have an effect on other fossil fuel companies, raising the pressure on them to change.”

The court case would, if successful, rule that Shell must reduce its CO2 emissions by 45% by 2030 compared to 2010 levels and to zero by 2050, in line with the Paris Agreement. This would have major implications, requiring Shell to move away from fossil fuels.

“In leaked company documents from the 1990s, Shell predicted that environmental organisations would start suing the company for causing climate change if it did not listen to the warnings of its own scientists. Well, that day has come.

"This rising tide of climate litigation will finally call climate-wrecking corporations like Shell to account and stop them in their tracks - helping to unleash the fossil free future we desperately need.”

Stay tuned: at 4pm CET today @Shell will receive a court summons demanding it to reduce its emissions in line with climate goals. This case is supported by 17.379 individual co-plaintiffs and 57 organisations worldwide! More details to come. #StopShell https://t.co/KgNRgXXJyY pic.twitter.com/z89Zw9l1Y7

A Crack in the Shell: New Documents Expose a Hidden Climate History