Arrests, debates, mine closures and more at Czech climate camp

From the 21st to the 25th of June a climate camp took pace in the coal-mining town of Horní Jiřetín, located in north-western Czech Republic. It was organized by Limity Jsme My “we are the limits” — a local Czech movement and Greenpeace. It was also supported by Hnuti DUHA / Friends of the Earth Czech Republic. The goal of the climate camp was to enforce ecological mining limits and demand climate justice. 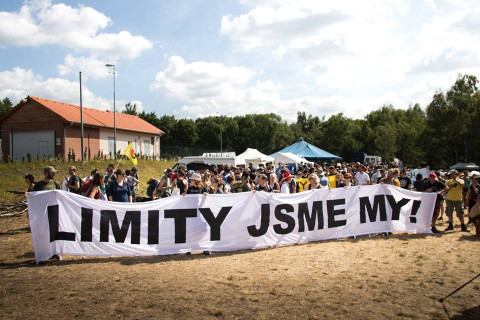 Since 2015, ecological limits meant to protect towns like Horní Jiřetín have been under attack. Horní Jiřetín, specifically, was threatened and the limits were broken once in order to build a new mine. During the communist era, Horní Jiřetín was almost destroyed multiple times due to proposed coal mine construction. After the revolution, ecological mining limits were established aiming to protect existing villages and towns from mining expansion, but now we see these villages and towns in peril again. 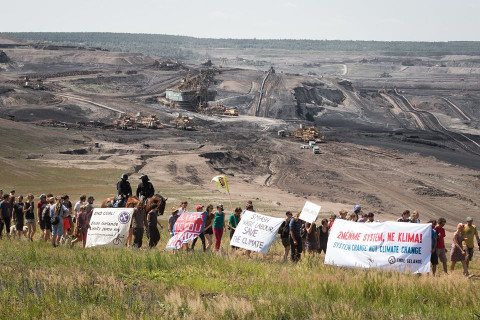 The main goal of the climate camp was to discourage coal power and show that the limits need to be respected. The camp was full of activity. The first three days were buzzing with discussions, debates and presentations.

Saturday the 24th was the busiest day of them all. On that day three actions took place. The first action involved activists linking arms along the ecological limits, and demanding that the limits be respected. The second action took place in front of a coal-fired power plant, where the activists called for climate justice and the end of coal-mining. During the third action, 130 activists walked into the mining site where they sat around an excavator. Also 10 or so people jumped the fences and stopped the conveyor belt that fed coal from the mining site to the nearby power plant. Police were heavily present despite the fact that the mine was shut down for the day. 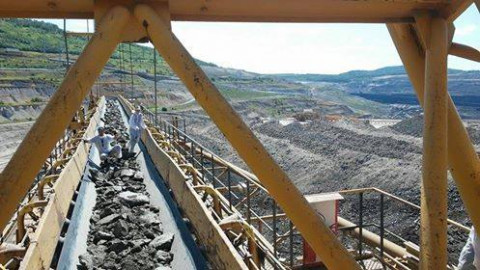 Police arrested everyone who went to the mines and people were held for varying lengths of time — some people even overnight because the police were only letting people out one by one.

Not stopping until last ppl released. We are not the ones committing crimes to humanity, we are the limits! #limityjsmemy #klimakemp pic.twitter.com/dg4YthJNUn

Despite this the action was a success! The mayor of Horní Jiřetín, Vladimír Buřt, was present and supporting the climate camp. Three mines in the area were closed for the weekend — they normally would have been running — as it seems the managers were not sure where the activists would go. Also, the camp received quite a bit of media attention, most of it fairly portraying the actions and activities.